Connect with us
Fuji star, Wasiu Alabi Pasuma has reacted to the suspension of a Redeemed Church Pastor, Toyin Ogundipe who was said to have paid him to perform at a crusade slated to hold in one of the parishes in Lagos Island.
The Fuji star declared that, although, the church’s management paid for the show, it is never done to expect him to pay back the “artiste fee” saying, “the fault is not ours, we were ready to perform for them until we learnt of the cancelation of the crusade”.
The Pastor in charge of Province 20 of the Redeemed Church had invited Pasuma to perform at the Church’s forthcoming crusade titled, “Lagos Island Family Areas Forum” between Friday, October 23rd- Sunday 25th, 2015.
Pasuma’s picture appeared on the handbill advert and posters alongside gospel singer, Tope Alabi and a former band leader of the late Fela Anikulapo’s Egypt 80 band, Kereke Jike.
The decision to stop the programme was because the church headquarters felt the Pastor had gone too far by inviting a secular artiste such as Pasuma to its church programme.
A source who spoke on condition of anonymity said the organisers did not do a detailed consultation before going ahead with the programme.
He also said that it was as a result of it that the programme was cancelled and the Pastor in charge of the church along with the organising committee suspended as they now  await further sanction from the provisional headquarters for dragging the name of the church in the mud.
investigations by City People reveal that The Redeemed Christian Church of God clearly frowns at the use of secular musicians, a development which has been clearly stated in its handbook to Pastors. 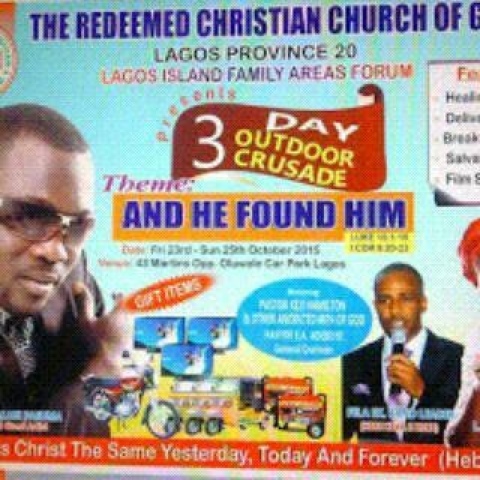 “…and the winner is” Pic story of TestifyArtbeatz Grand Finale

WHEN THE BLESSED BE BROKEN…. CELEBRATING FREEDOM SEASON 6